I'm far too exited about my most recent discovery. Should anyone be this excited about 'spent grain'? 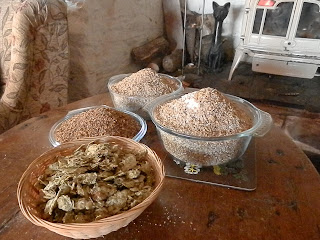 Grains and hops ready to be added to hot water


Having just brewed some beer from scratch  and finally got my head around sparging, mashing, boiling and so on I was overjoyed to discover that once I had completed the brewing beer bit I could then use the spent malt to make flour!

There's really not many times when you can really use a food stuff twice...the brewing process unlocks loads of sugar and other bits n bobs from the malt and although it does rob it of some of its goodness its still damn good stuff that can make a real chunky granary bread... (and a nice hot porridge for the hens for when it's really cold)

I'm very pleased about the brewing bit too as Ive only ever done 'proper' beer once (in other words not using malt extract) and I didn't give in to the the temptation of parting with serious money to buy a boiler with a thermostat. Ok so it would have been easier but two large jam pans did the trick , keeping them covered after the mix reached 150 F and giving them a quick boost every 15 or twenty minutes or so. 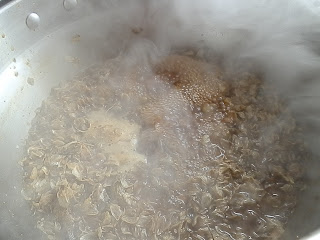 Managed to sparge (flush the sugars) out of the malt with very basic method of gently pouring the liquid (the wort) out of a jug and through a sieve from a height of about 1 foot above the suspended grain bag. It was quite an epic brewing day but in the end after taking into account the loaves of bread that will be made from the spent malt , the beer will come in at just 10p per pint! (Even without the reuse of grain it comes in at less than 40p per pint)

Books I used to get to grips with all this were: 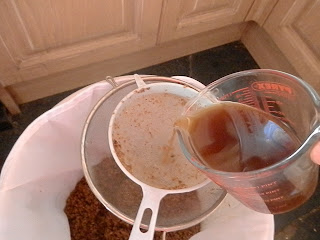 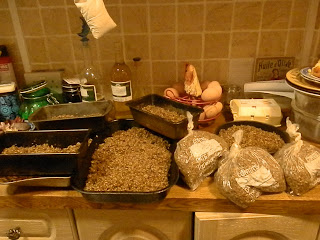 Large amounts of spent grain dried and ready for use
Posted by Green Phoenix at 15:47